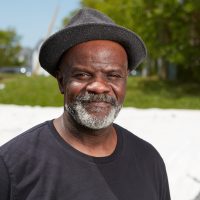 Jeremiah Neal was born and raised in Muskegon Heights, Michigan.  Joining the United States Air Force started his journey away from his home town.  Jeremiah eventually found himself making a home in Omaha, Nebraska. In Omaha, Jeremiah mentored with art educator Eddith Buis furthering his artistic passion and ability.

Jeremiah has been an invaluable asset to the Sienna-Francis Houses art programs for the homeless, of which he has been a board member since 2014, and A Midsummer’s Mural Company team. He was especially valuable on the Supermercado murals

He has exhibited at Sienna-Francis House and the Scott Center (2009), a 1-man show at Hot Shops Art Center, (2010), a group show at Michael Phipps Gallery, (the “Luigi Waites Tribute”) and a 2-man exhibit at the Phipps Gallery, both in 2011.

He has created and displayed murals at Sienna-Francis House, outdoors, the KROC Center, and the Silver stone Group, and two murals for the American National bank on 90th and Dodge in Omaha.
Jeremiah states; “I feel it’s in my DNA to contribute to society at this point of my life; to continue painting and writing to help others to see life as the adventure it is.”  Thus this mural was destined to be created and issued as a challenge to all communities. (see legacy mural challenge for more details)

My first name, Jeremiah, means “God Exalts” and my last name, Neal, means “Champion.” Put them together and you get my mural and my mission: to exalt champions.

It’s like Mount Rushmore and the Hollywood Walk of Fame- combined with the Sports Hall of fame- except it is ever expanding and unique to each community. Each school or area votes and legends are to be added as that area sees fit. 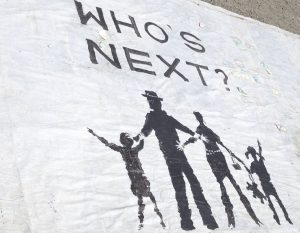 It started with a mistaken belief that President Gerald Ford was from Grand Rapids, Michigan. Upon finding out that he was in fact born in Omaha, but raised in Michigan, my curiosity was piqued.  It makes one wonder; who is really from where.   That led to the artistic vision of the legacymural.com (patent pending)

My hope is that the mural will encourage us to push “pause” on our current reality, examine who we are, and more importantly what influences from the past can help shape us today- BECAUSE ROOTS MATTER.  You can only know your roots if you dig… can you dig it?

This mural is a time machine- It goes backwards, sideways, and forward… How can you affect the future? Or do you believe it is already written. It forces you to look at how you fall in place within this universe… Where are you?… YOU ARE HERE!  You can see history and the future at one time! It’s scary, and marvelous at the same time.